The principle of DESI is simple: a pneumatically assisted electrospray needle produces charged droplets of solvent, which are directed onto the surface to be analyzed. A thin film of solvent is created on a surface, and thus the components located in this area are dissolved. A new portion of charged droplets is responsible for releasing the secondary micro droplets with analytes from the surface. Finally, secondary droplets are evaporated by standard electrospray mechanism on their way to the inlet of the mass spectrometer. 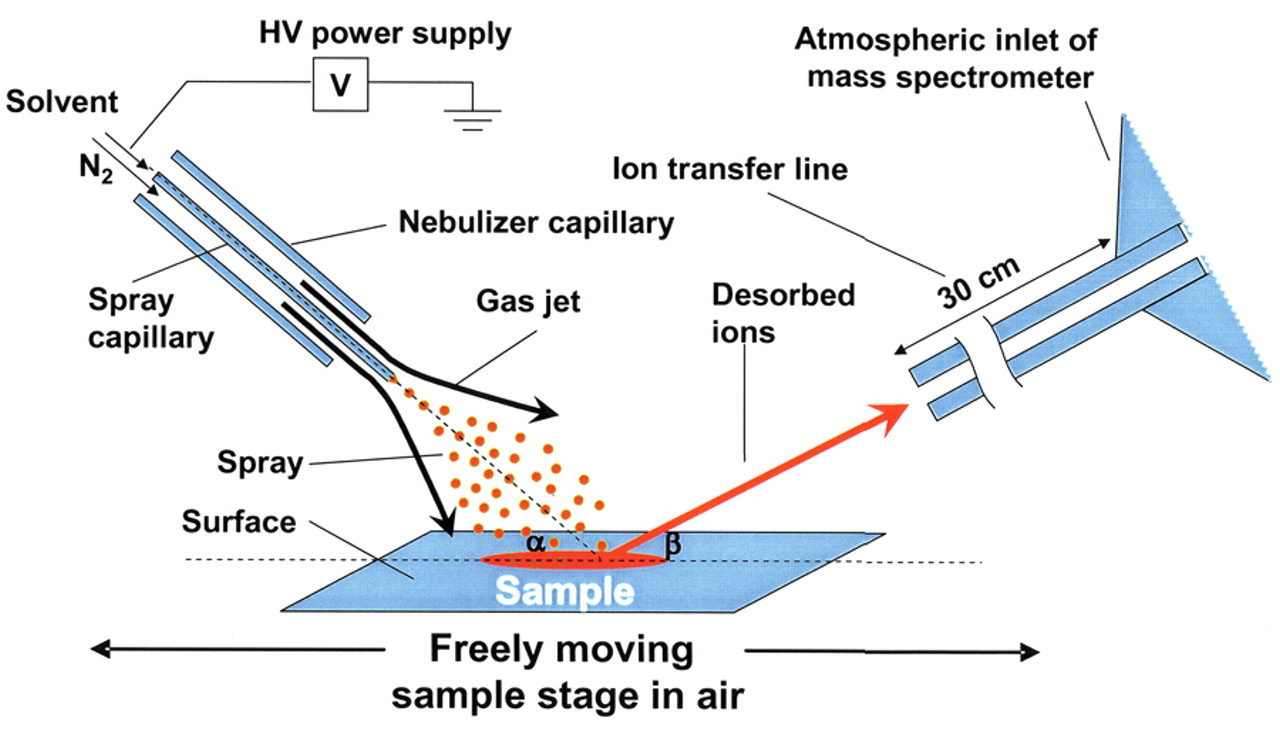 Multiple reaction monitoring (MRM) is the most common method for quantification of analytes by LC/MS/MS. In MRM, ions are selected to make it through the first quadrupole and into the collision cell. These ions are referred to as the precursor, or parent, ion. These ions are fragmented in the collision cell. Certain fragment ions referred to as product, or daughter, ions are selected to make it through the second quadrupole. The transition from precursor/parent ion to product/daughter ions is referred to as an ion transition. For example, the precursor ion (quasimolecular ion) of morphine is 286. The most intense ions created by the fragmentation of 286 is 201, 181, and 165. This gives us three ion transitions for morphine: 286 → 201, 286 → 181, and 286 →165. For analysis, we might want to use 286 → 201 as the quantitative ion transition and 286 → 181 as the qualifier ion transition.

Efficient collection of the ions generated in the DESI 2D system requires a close proximity of the ion inlet of the mass spectrometer to the sample being analyzed. Therefore a large diameter, bazooka ion transfer capillary is included with the system to allow for analysis of larger sample areas with Waters mass spectrometers. In addition, the ion transfer capillary is slightly inclined such that there is clearance for samples to pass below the capillary. 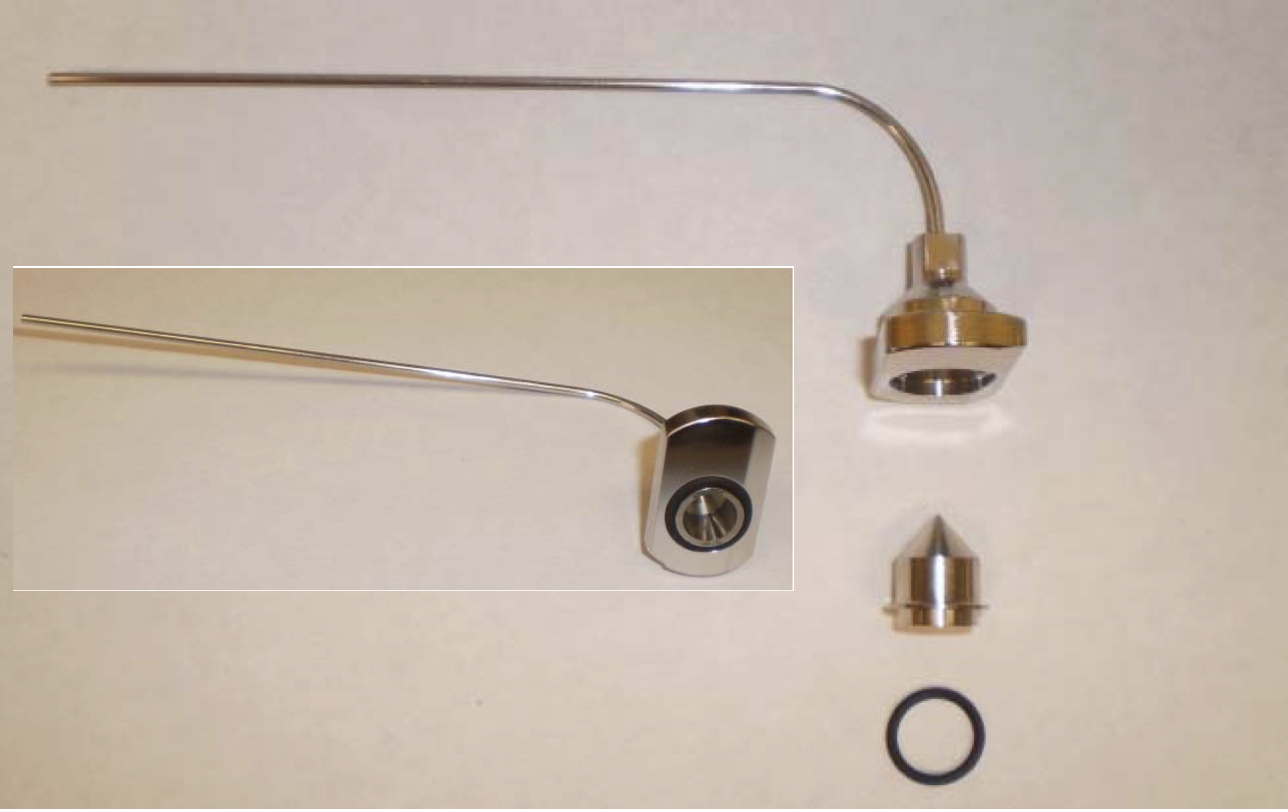 DESI should be used to trigger the MS acquisition. Below is the contact closure setting.

Description: DESI 2D stage is either not moving or it is not moving properly. For instance, the system cover blocks its movement.

It may be necessary to move the sample stage position prior to installing/removing the system cover. The cover cannot be installed /removed with the stage at the home position.

Description: The vacuum is lost when we turn on the vacuum isolation valve

Reason: The ESI sampling cone and/or o-ring are not placed in bazooka extension

Solution: Make sure to put sample cone and o-ring in the ESI gas cone. See Section 3.2.1 for details.

This problem could easily happen when we change from ESI source to DESI source. Make sure not to make the same mistake.

The following recommended parameters shown in Figure 3.4 can be used as the start for DESI source optimization. We have found that Tip-to-inlet distance is the most critical parameter to enhance ion signal intensity. 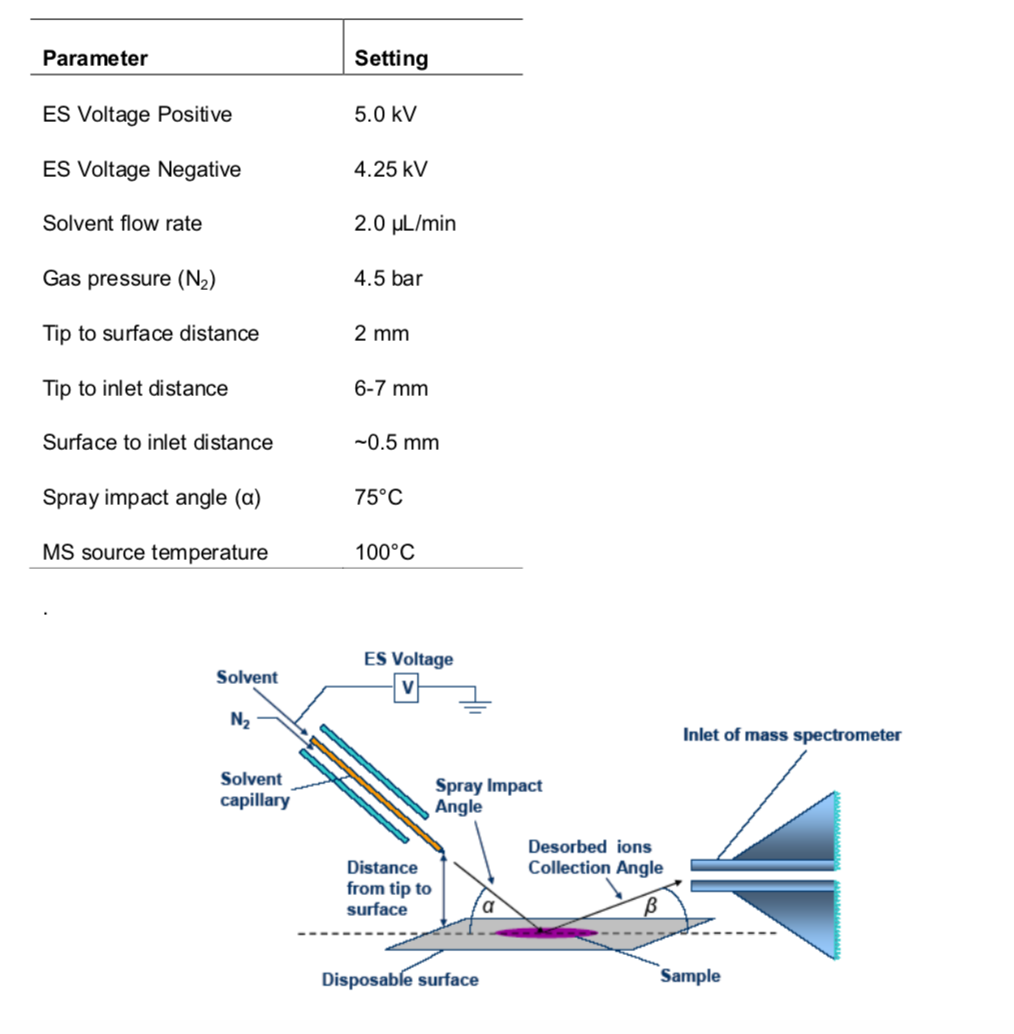 The solvent, 98:2 methanol: water + 0.01% formic acid is introduced at a flow rate of 2 μL/min. Omni Slides (76 x 26mm microscope slides with hydrophobic array substrates) which have 24 discrete sample spotting locations, with a 3 mm diameter, are used to introduce the samples. Mark the center of the spots (furthest spot to the left) using the red Sharpie for positive ion and the black Staedtler Lumocolor for negative ion.